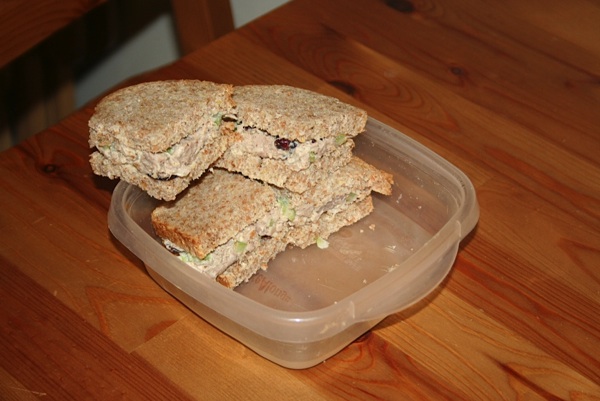 The backstory: A few weeks ago I attempted to make bread for the first time. It was a focaccia. Baby steps. Focaccia is both relatively simple to create and the epitome of a savory delight. But I was nervous and had mixed feelings about the results so I didn’t post about it. I consider this a poor move, and that sort of hesitancy stops here and now. What is this blog if not a shared adventure that sometimes involves weirdness or failure?

This brings me to the squirrel salad sandwich. For college graduation I bought my boyfriend (Chris) an L.L. Bean Cookbook, which describes squirrel meat as a wild game delicacy whose flavor cannot be matched. We kind of ignored this statement for a while, until last week when he brought home a field-dressed squirrel. This was in compliance with the house rules: If something is put in the fridge as a cleaned, prepared and unrecognizable ingredient, then I will most likely accept it and turn it into a meal.

However, I was totally turned off by this squirrel. For days it was (metaphorically) staring me right in the face, forcing me into some deep and uncharted self-inquiry. I never in a million years thought I was the kind of person who would taste, never mind cook, a squirrel. Am I that person? Is this too far? What does this mean? Would I post about it? Slowly I began to wonder, what will it taste like?

If I didn’t make a decision soon it was going to spoil, and that had to be worse fate of all. It’s just meat. I’ve tried rabbit. Among meat-eaters, rabbits are generally accepted as an offbeat thing to stew or braise, and how are they actually any different? I respect belief systems, but it’s hard for me to get behind an idea with which I do not agree.

So, we boiled the squirrel, pulled the meat and I took a bite. I’m not even sure what I wanted to feel, but it was just downright tasty.  Cross my heart it tasted like the dark meat of a chicken- moist, mild, and completely palatable. Chris made the rest into a chopped salad with mayo, mustard, celery and dried cranberries to share with a few curious friends, and that was the end.

I doubt that I am going to start eating squirrel on the regular, but I am glad I cooked it and glad I tried it. There are countless epicurean adventures to be had with food and I want to make sure I approach each one with consideration, lest I miss out for no reason. I’m not sure where we go from here, but trust I will let you know.

This leaves me wondering, how do you feel about the weridest thing you’ve ever tasted?

Published by the home grown tomato

View all posts by the home grown tomato